The Night in Cannes Sur Mer that Saved our Sanity #MurphysDo148Days 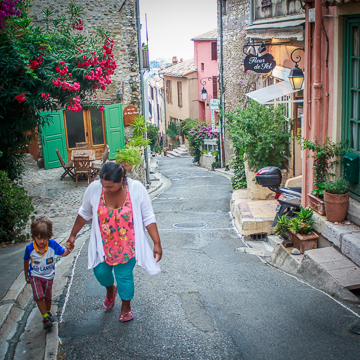 When we were touring through Southern France this past summer, one of the destinations I most wanted to visit was Cannes. Being a movie buff, I was interested in seeing the city that hosts the world’s most famous film festival, which is held each May. We were due to visit the area in June and so we would not have an opportunity to immerse ourselves in the excitement of the festival itself, but I was still interested in visiting the famous city on the French Riviera, known for beaches and glamour.

While looking for GuestToGuest accommodations in Cannes, we discovered an available apartment in nearby Cagnes Sur Mer, and decided to check it out, knowing that Cannes was a short 20 minute train ride to the west. Roughly ⅔ the size of Cannes and situated on the same Ligurian Sea as its famous neighbour, Cagnes Sur Mer is a sleepy and serene seaside city with a number of intriguing restaurants, a large beach, and for some reason, a hair salon every 50 meters. Its location enabled us to spend an afternoon exploring downtown Cannes, and we also discovered a bus that took us to the Promenade des Anglais in downtown Nice in just 45 minutes.

After spending our Friday afternoon in Cannes, we spent the evening at the top attraction in Cagnes Sur Mer, the Haut de Cagnes, an old village located on a hill just north of the downtown sector. Despite the steep incline that led to the top, we decided to pack up our double stroller and traverse the 200 meter long road that leads up to the centre of the village. Along the way, we were passed by a couple fitness junkies testing their limits on the hill, and there were a couple steep sections where I asked the kids to walk for a bit as I strained to push the stroller along. A small city bus does travel along the route to the top, but I thought the climb was a fun way to explore the village and get some exercise. When we got to the top, we had earned the opportunity to relax and enjoy the views. The kids, since they were in the stroller for much of the ascent, still had the energy to enjoy the small playground we found at the top.

In addition to several restaurants, we found a small stage, where a few jazz musicians were entertaining the crowds. We sat and enjoyed the music while the kids played but our appetites had grown during the climb and so we soon set out to find dinner. Unfortunately, despite being in a hard to reach location, we encountered packed restaurants. Our first choice, Restaurant Les Baux, looked amazing but was very small. When we asked about a table, the host apologized and indicated that they were fully booked. If this place is on your list, make a reservation.

Next we tried Le Jimmy’s, which was a large restaurant with outdoor seating, but we were again told that the restaurant was fully booked. We found this strange as there were a number of open tables, but we just moved on. The other options at the top of the hill did not interested us and so we started back towards home, knowing that there were several options along the steep road in and out of the village. We first popped our head into Fleur de Sel, which had a Michelin sticker in the window, but they too were reserved for the night. Finally, we reached Le Perousin, and despite it being the smallest restaurant we visited that day, we found a spot, which was lucky since the entire restaurant only had four tables! 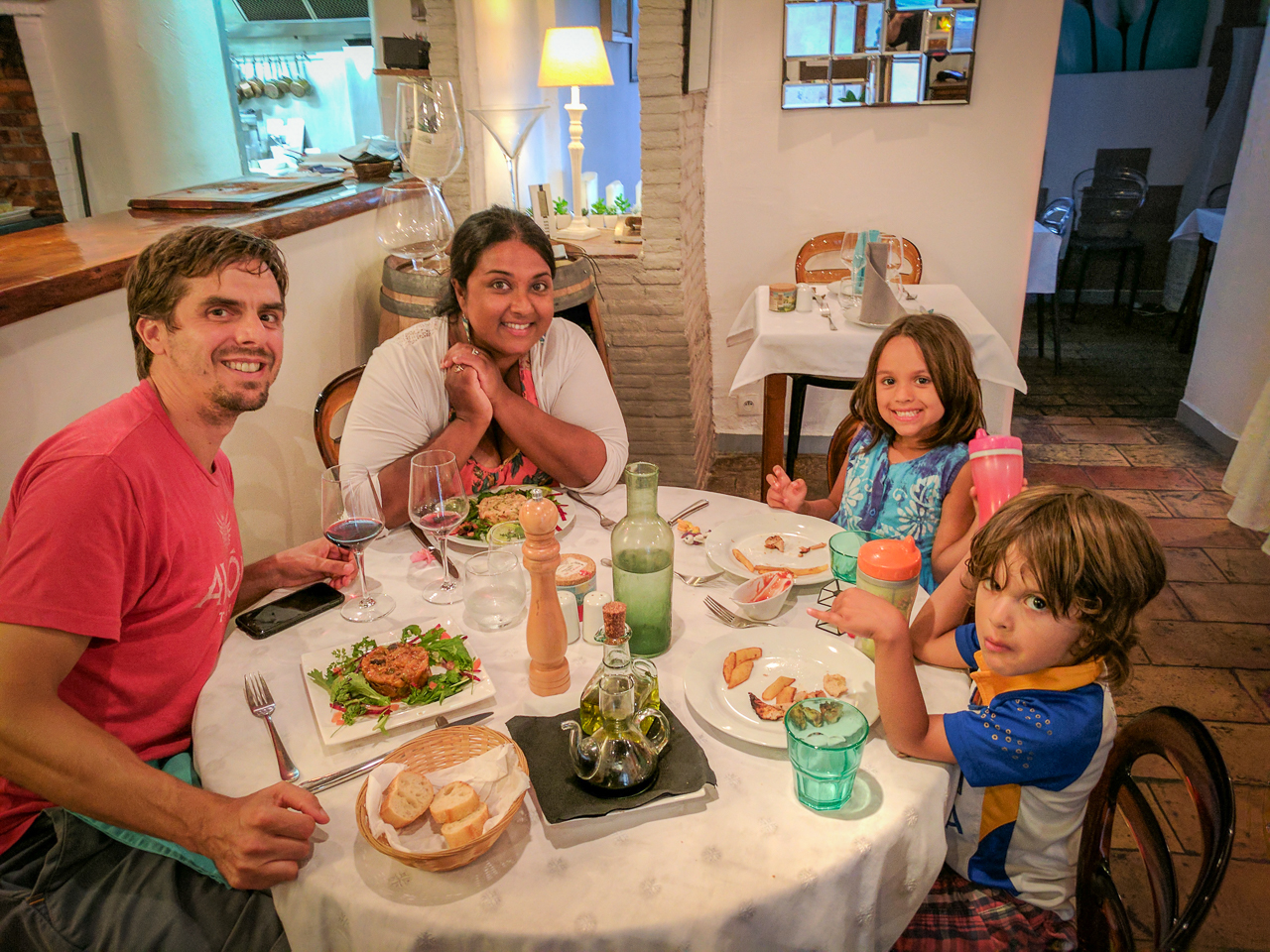 We found our happy place

Our earlier rejections had paid dividends, because Le Perousin is one of the most charming dining experiences we’ve ever had. The restaurant only had one employee, who happened to be the owner, and also the chef, the waiter, and the bartender. I would also add Entertainer to his job description. We learned his name, Laurent, and for the next two hours, we sat, listened, and watched as Laurent explained the menu, made the kids feel at home, and whisked in and out of the kitchen preparing the meal.

Laurent instinctively knew what the kids wanted and set down a plate of chicken strips and french fries that left them quiet and content (as did the paper and crayons he provided). Our host was pleasantly surprised to discover the Little Man’s love of foie gras and prepared a generous helping for the table. We also started with the Salmon Tartare and a dish Laurant referred to as Ratatouille. Thinking it was a soup, since all my knowledge, truths and untruths, comes from movies, I ordered it and was surprised to discover that it’s more of a mixed vegetable dish. However, it was still tasty and I was happy to have been set straight.

For our mains, I ordered the chicken as well, though mine was prepared with the grown-up sauce, and Yashy ordered the steak. Everything was so good and despite being quite full after eating most of the two appetizers, I made room for my main. Then, Yashy and the kids capped the meal with the Creme Brule while I savoured my second glass of red wine. Laurent had, of course, picked out the wine himself, and as expected, it was excellent.

Steak that is as good as it looks.

Since we had entered France 10 days before, Yashy was eager to find any and all French cooking we could find. What we usually found was Italian food, to her dismay. On this night, however, we had discovered the true French experience. A one man band putting his extensive culinary knowledge to work. I don’t know how he does it, but he provided our family with one of our fondest memories from the trip. When we entered Cagnes Sur Mer, we were right about the midway point of our 5 month trip, and we were feeling completely exhausted. Our previous stop in Marseille was a disaster and I think Yashy and I were both eager to get back to Toronto by that point, but all it took was three nights in Cagnes Sur Mer, and this fine French meal at Le Perousin, to reset ourselves for the remainder of journey, and the great times that lay ahead in Germany, Crotatia, the Netherlands, and England.

‹ 5 Ways to Avoid BTS : Back To Sickness #ONVaccine › What We Spent Travelling for 5 months