Thought we’d give you a quick update on how Baby Boy has done this week since we did not redshirt him. Our plan is to give him two weeks to suss things out because we know Little Monkey did enjoy her pre-school (and hated JK) after a very bumpy start. Today was day 4 of going to school and while he has apparently been crying in school every day and on the bus yesterday, today was the first day he cried before getting ON the bus. The hubs had to go and plop him on the seat. No fun at all! He also says he doesn’t want to make any friends and that he just stands instead of running around in the playground. Dare I mention that he has had ZERO poop incidents? Don’t worry…diaper is still soaked when he comes home as he refuses to go to the potty in school. He does bring back an empty lunchbox though… so we’re winning at ONE thing!

Many of you probably saw me share on social media that the school did not put him on the bus back home on his first day – yup. Apparently he fell off the bus list which he was on the week before. All is good now and despite it being a rough start with him having to wait an extra hour in school on his first day, he’s now on the bus with his sister. I have my fingers, toes and everything else crossed that things get better next week. If not, we can always explore a full day part-time option and see if the school will be open to that.

His jacket might be bright and yellow but his mood, like his school uniform, is pretty darn blue. 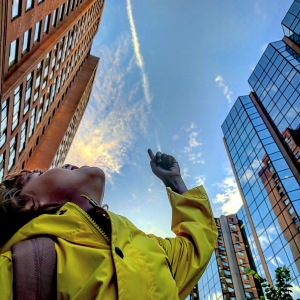 5 Ways to Avoid BTS : Back To Sickness #ONVaccine

Back To School Shoes #GotItAtSears

‹ Back To School Shoes #GotItAtSears › 5 Ways to Avoid BTS : Back To Sickness #ONVaccine