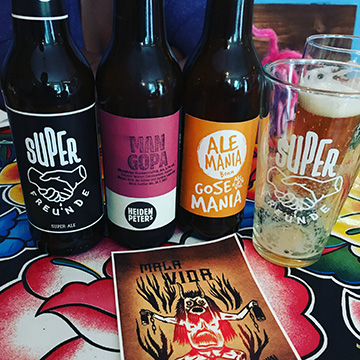 Have you heard of the German Purity Law? Essentially, it refers to a series of regulations introduced in 16th century Bavaria that limit the ingredients brewers are allowed to use in beer production to water, barley, and hops. Yeast was added later. 500 years later and most German beermakers still follow these regulations. If you ever pick up a beer and see the term, Reinheitsgebot, you’re drinking a beer that contains only those four ingredients.

The law was introduced for a number of reasons, mainly protectionist in nature. It prevented beermakers from competing with bakers for wheat and rye and also protected Bavarian beers from competition with Northern German beers that contained additional additives. Religion may have also played a role, limiting the use of ingredients, like gruit, that were thought to be used in Pagan rituals.

With some exceptions, most German made beers still follow the purity law, and as a result, German beermakers have fallen behind in the craft beer movement, limited by a range of styles that have remained largely unchanged for hundreds of years. Let’s just say I was a little worried about the beer I would have to drink when I landed in the city.

I had no need to fear, however, as a small but mighty group of craft beer shops and pubs offer a wide range of American and European craft beers. While it’s true that most Germans still prefer beers brewed according to the purity law, just like most American beer drinkers still stick with brands like Coors Light and Budweiser, tastes are bound to change. As many of us know, craft beer is too good to be ignored for long. Why eat Flank steak when there is Rib-Eye on the menu?

On the bright side, until craft beers pervade tap rooms in Europe as extensively as in North America, finding a table at a craft beer hotspot in Berlin is much easier than doing so in the US and Canada. There are great places to drink a beer peppered through Berlin. I know I didn’t track them all down but was quite happy with the places I visited.

Here are some of the best places to drink craft beer in Berlin:

If you have spent any amount of time dining out in Germany, the thing about Hopfenreich that might impress you the most is the consistently filled pitcher of water that rests on a shelf near the bar. Restaurants in Germany rarely serve tap water, even if you ask, and so seeing this made me want to spend the day here. Beer-wise, the tap list at Hopfenreich is the most impressive one I found in Berlin. Traditional-style German beer is available, as well as a range of American and European beers. I was a little disapointed that there were no sour beers on tap, not even a Berliner Weise, but with so many options, it was easy to choose a beer I knew I would enjoy.

This pub’s outdoor patio and adjacent beer hall offers what is essentially a year-round Octoberfest. Serving up steins of very reasonably priced beers, including a revolving range of seasonal beers, Eschenbräu is the ideal place to bring a group looking to be loud and merry. You won’t find much food here, though they do serve some tasty pretzels. Luckily, patrons are welcome to bring in outside food, as we did from a local Turkish sandwich shop. Seeing their large seasonal menu can be quite a tease, since usually only one or two are available at a time, but I was content with the Pils and Dark beers I sampled, and they also offer a Wheat on their year round menu. Eschenbräu is an example of a pub that straddles the line between purity law beers and modern craft. Mainly, it’s just a really fun place to hang out.

Unassuming from the outside, the interior of Eschenbräu is like a year-round Octoberfest

If I had to pick a favorite place to drink beer in Berlin, Mezcalothek would be the spot. With a simple menu that features only four options and an outstanding beer list that includes some of the best German produced craft beer, I found everything I needed there. The agave ale, Mala Vida, is a must try. It’s a unique beer and those are hard to find in Germany. This place is pretty small and so it’s best to visit in the afternoon or early evening, but if you are looking for a great place to grab some Mexican food and try a few German craft beers, Tentacion Mezcalothek is an ideal stop.

One of the things I like the most about the craft beer scene in Europe is that many of the best craft beer shops also offer patrons the opportunity to drink beer on site. Lager Lager features a range of mainly Belgian, English and German beers in its fridges, which can be purchased to go or consumed onsite. This small craft beer bar is located in a fun, eclectic neighbourhood and offers great beer choices. I even found a few sour beers and some hard to find Belgian offerings on site. You can fill a growler here too!

For a great take home selection of craft beer, Biererei is one of the city’s best stops. I happily grabbed a couple Cantillon beers off its shelves and spend time speaking with its English speaking owner about craft beer in Germany. He had a lot of knowledge about the burgeoning local scene and recommended an outstanding Berliner Weise from Schneeeule. A style that has largely been lost through the centuries, the Berliner Weise is making a comeback in Berlin and this brewery is working hard to replicate the original brewing process using old yeast strains and bottle conditioning. You can also drink on site here, so if you are looking to sip a few beers from a wide selection of offerings, visit Biererei

The cafe is not a place where you’ll find good craft beer, but it is a great place to drink beer. Located in the Tiergarten, this outdoor drinking spot is lined with picnic tables, noisy drinkers, and even has row boats for rent, which I strongly recommend doing first. There are only a couple beer options available but since you should at least try one traditional German beer in the city, this is one of the best places to do so.

Drink beer the German way, from a stein at a picnic table

If you are strictly a fan of cutting edge craft beer, such as Bourbon Barrel Aged Stouts or Dry Hopped Sours, you will have a tough time tracking down those types of beers in Berlin, but it is possible to find something quite flavorful at one of the places listed above. The city is sprawling but has an excellent subway system that makes any of the places easy to reach. As they are all outside of the downtown core, visiting these great craft beer locations also gives you a chance to see a few of the many great neighborhoods in the city. We also visited all of the above spots with our kids in tow. Germany is quite kid friendly as we discovered!